Resolution at last!   Often I have this overly optimistic  uncluttered timeline that I think I work on.  In reality, unless someone is paying me, things never get done like I imagine.  I actually finished this up last weekend, but it took me a whole week to get the time to post it.  I’m still figuring out this whole blog thing.

Anyways, picking up from where I left off last week, this is the exciting conclusion of my companion cube tutorial.  At this point I have the six sides of my cube finished and it’s time to transform it into a 3-D shape.

Optional step: I want my Weighted Companion Cube to actually be weighted, so before stuffing I filled a little sack made from some cut up nylons with about 1/2 cup of the little plastic beanbag pellets.  In my original cube I used rice, but have since become more internet shopping savvy and discovered that the little plastic pellets are very inexpensive and I don’t have to worry about bugs or moisture making them icky.  I imagine the toe end of a sock or some other little pouch can be used to contain them just as effectively as the nylons. 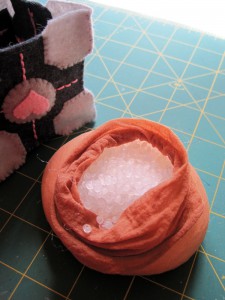 I think I used about half a cup of pellets, but it’s mostly a matter of preference and what will fit.

Optional step 2: Break for tea and pickles.  We’re in the home stretch now and must gather ourselves for the final push.  Mmm…Earl Grey and bread-and-butter pickles.  I would recommend having the pickles while you put the tea kettle on.  If it’s after five o’clock, a beer is also a good choice for those of age.

And away I go!