A couple of weekends ago, I decided to venture into Baltimore to witness the event that is Otakon.  For the unaware Otakon is a large annual convention for fans of anime, manga, video games and the associated culture.  There are lots of fun events, artists, and vendors of all manner of strange wares.  In essence it is a huge Otaku geekfest.  Now, I’m not really an anime nerd, but I’ve never gone to one of these events and I have to admit I was rather curious what it was actually like.  Last summer I happened to be passing by Otakon and the bizarrely dressed throngs of people were fascinating.  The vast majority who attend Otakon dress up or cosplay as their favorite characters so it is quite something to behold.  Despite Otakon being focused Eastern Asian art and culture, the variety of costumes also spreads across the rest of the geek spectrum.  So, truthfully the primary reason I attended was to see all the people who turn out for this sort of thing. 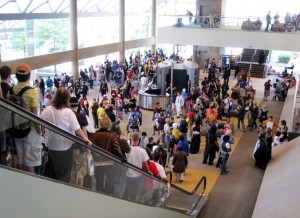 Of course to attend such an event me and my accomplice, Mr. Boy, decided it only fitting we have our own awesome costumes.  I didn’t end up having a lot of time to work on his costume, so it had to be fairly simple.  With this in mind Boy decided to be a “modern” Zulu War British soldier.  This seemed rather appropriate for our adventure.   Fortunately he already had a pith helmet, and a red t-shirt was used instead of the traditional red jacket.  Then I made him a giant plush mustache out of felt.  The mustache was very simple and fun to make and I think I might steal it from him.  Next I took care of the sash which was just two long strips attached at the waist.  I lucked out and found some white “pleather” in the remnant bin in the home decor department at my local fabric store so it was super cheap.  Unfortunately, I was in a rush so I used hook and eyes as the waist band closure.  They didn’t stay put very well and I am going to have to replace them with Velcro at some point.  Last of all I made the epaulets.  Once again the home decor department was very handy and I found the perfect fringe material.  This actually turned out to be the most expensive part of the whole thing.  Since the epaulets were going to be worn on top of a t-shirt I made made them sort of soft and used safety pins to attach them.  Even though this was a simple costume, I felt it was very successful and his mustache was greatly admired.  Seriously, who doesn’t respect a fantastic mustache?  I was very pleased since it was pretty easy to put this costume together.

At this point, it became tragically apparent that the merciless beast of poor time management had finally got the better of me.  There was no way I was going to finish my own get-up.  I had been working on it piecemeal in between commissions, but as usual it was on the back burner.  Fortunately, because it is very satisfying to make costumes for Mr. Boy I didn’t feel too down about my own humdrum appearance.  Okay, maybe I wasn’t that humdrum.  I still had pink hair and my big furry purple monster bag.

Anyways, thus prepared for our adventure, we set off to enjoy the spectacle and all in all it was pretty fun.  I was far from disappointed by all the costumed goodness.  I really do love costumes and seeing the creative ways people bring their favorite characters to life.  Since most of the costumes are handmade, it was fascinating to see the different skill levels and ingenuity that was employed.  Of course there was the vast sea of anime and manga cosplays (of which I could identify embarrassingly few), but there was also everything from sci-fi to video games,  Disney to (disturbingly accurate) Rockso the Rock and Roll Clown. 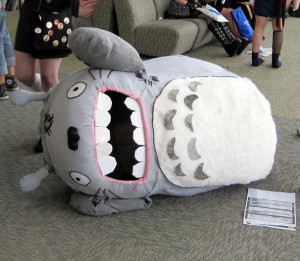 One of my surprising favorites were the people dressed up as various player classes from the video game Team Fortress 2.  All of the “characters” in the game are supposed to be male, but there were several female cosplayers who fit their costumes to their own gender.  I liked that out of all the costumes this group best seemed to take the roles beyond the literal interpretation, but remained true to character.  While I appreciate the effort and artistry of a very accurate cosplay, I think it is important to remember that you don’t have to be completely literal with your costumes to do a good job and have a good time. 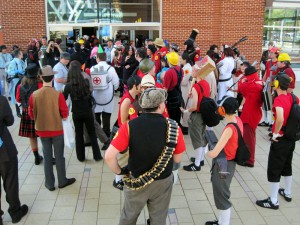 I apologize sparseness of photos.   Mr. Boy was not as handy with a camera as I thought he was.  I’m headed to a huge con up in Toronto next week though and hopefully will return with all sorts of wonderful pictures.

Hmm, maybe I should get back to work now.