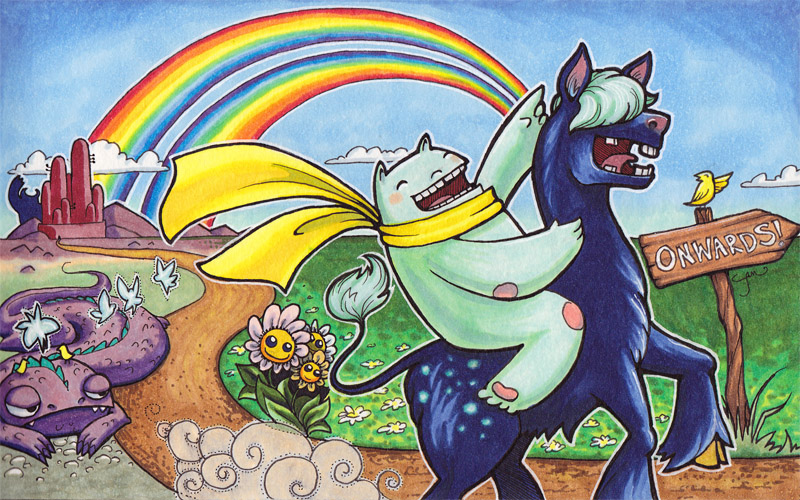 Courageous Tillie and his faithful steed George set off to seek adventure. Who knew what exciting foreign lands and heroic deeds lay before them? They would cross the treacherous River of Eels, slay the terrible monster of Gila, and they would rescue fair Hilda. Songs would be written about them, they would be showered with untold riches, and they would get to have tea with the Queen. All the neighbors would be envious. And as long as they were back by dinner, Tillie’s mom promised they could both have cupcakes with rainbow sprinkles for dessert.

Do you remember being a kid and you just got a brand new set of markers (or colored pencils, or crayons) and you were consumed by a need to use all of them, at once, on one glorious picture?  This happened to me rather frequently.  Just seeing the huge rainbow mega packs in the store would make my eyes glaze over with longing.  This did happen to other children, right?  Well, I never grew out of it.  Every time I go into an art store, the panoply of  color still calls out to me and I am overwhelmed by a irrational need to own all of them, even the colors I don’t really like.  I guess it’s not all that surprising that I ended where I am today.

Anyways, the point of this story is that I got a set of markers for Christmas.  Fancy grown-up artist markers.  I have been lusting after a set of Copic art markers for several years now, but I was too cheap (broke) to ever invest in a set.  At $4-6 bucks a pop, they get expensive very quickly, and I was worried that I might not like them after blowing all that money.  At some point in the past I tried out some Prismacolor markers and it felt like I was coloring with very expensive Sharpies that were half dried up.  Sure, I do have a beloved rainbow set of Sharpies, but I don’t use them for artistic masterpieces.  On the other hand, I have only ever heard good things about Copic markers, and I like the look of artwork produced using them.  I really wanted to give them a try.  I was so excited when I finally got them, that I think I squealed when I opened the package. 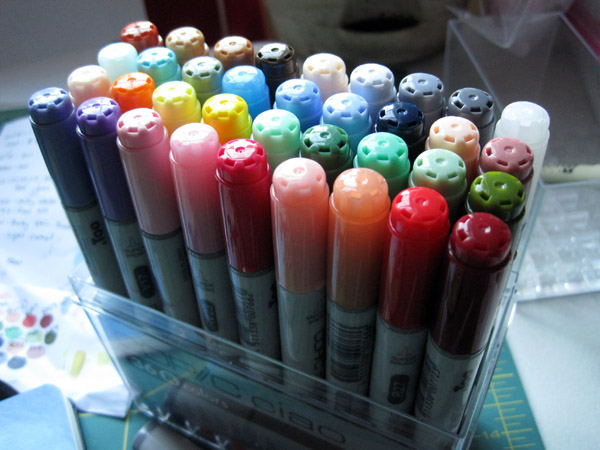 Needless to say, I’ve been avidly tooling around with them in my spare time since then.  The illustration above pretty much sums up my childlike glee.  I am extremely pleased with them.  They are everything I wanted them to be.  They are double ended, with a wonderful brush tip on one side.  The color flows smoothly from both ends.  You can layer and blend, and there is no icky smell–the whole experience is very similar to using watercolors.  I’ve been pretending for years that painting with watercolors was an enjoyable, not time intensive, finicky, often frustrating experience.  This is really what I wanted all along.  Double plus bonus, I have also discovered that they work well on fabric which opens up all sorts of new possibilities for my sewing.  I didn’t even consider this use until after I got them. 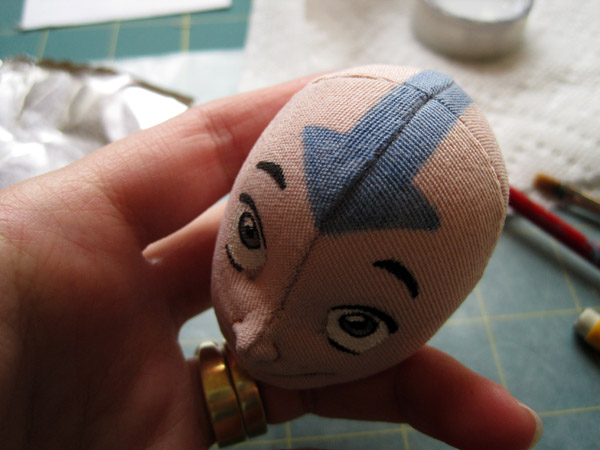 So if you have ever considered trying out art markers, I would definitely recommend them.  About the only drawbacks in my mind are the expense, and the fact that they bleed through nearly any paper.  The expense is worth it, especially considering that they are refillable, and as long as you remember to put down a blotter sheet, the other part isn’t a problem either.  There are a few different styles available, but I found this to be a pretty helpful breakdown of each:  Copic, Sketch, Ciao, or Wide.  If you are wondering, I have the 36 B set of the Ciaos.

Now that I have this wonderful set, I am struck with a new dilemma–I only have 36 out of the hundreds of colors.  It seems like such a paltry number all of a sudden.  I need all the colors.  It’s like Pokemon, you gotta catch them all.  I suppose if you aren’t into Pokemon or obsessed with art supplies, you don’t understand.  I see you start to back away slowly with a concerned look on your face.  It’s okay, I understand.  It’s not for you.  Just enjoy the pictures and I promise I won’t tell you anything about how awesome my Charizard is.