All Posts in “art”

Right after that, I ran my bike off a cliff because I wasn’t paying attention. Next thing I know, my bike is exploding, I’m flying through the air, and the cat shows up to inexplicably save me with its magic powers. I thought maybe I was crazy when he first started talking to me, but that all changed when I discovered my own latent magic powers. We flew off into the sunset and that was the beginning of our fantastic hijinks.

Actually, I was a chicken and I didn’t go back to check if it was a magic cat. I was also rather intent on getting that ice cream. I’m pretty sure it was a magical cat though. I stared at him, he stared at me. We had a moment. If I see him again, I’ll know for sure.

I decided the other day that for each new project or craft I want to start, I have to make some sort of blog post first. Later that evening (as I’m working on a project I grandfathered in) I was struck with the inspiration to do a series of little comics illustrating brief moments of life in Japan. And I had a perfect idea for the first comic. It simply and brilliantly conveyed the quirkiness and charm of my everyday life here. I thought to myself, “Geez, I’m ingenious! I sure won’t forget this.”

In between having this inspiration, and walking upstairs to write it down, the idea completely evaporated, leaving just the barest hint of what it might have been. I had been so pleased with the idea, that I’ve tried all week to recall it. It remains infuriatingly elusive. So instead I made a comic about losing my mind.

On an unrelated note, my apologies to anyone who has tried to comment in the past few months. My notifications system was broken and I didn’t realize it until today. I wasn’t just ignoring you, I promise. 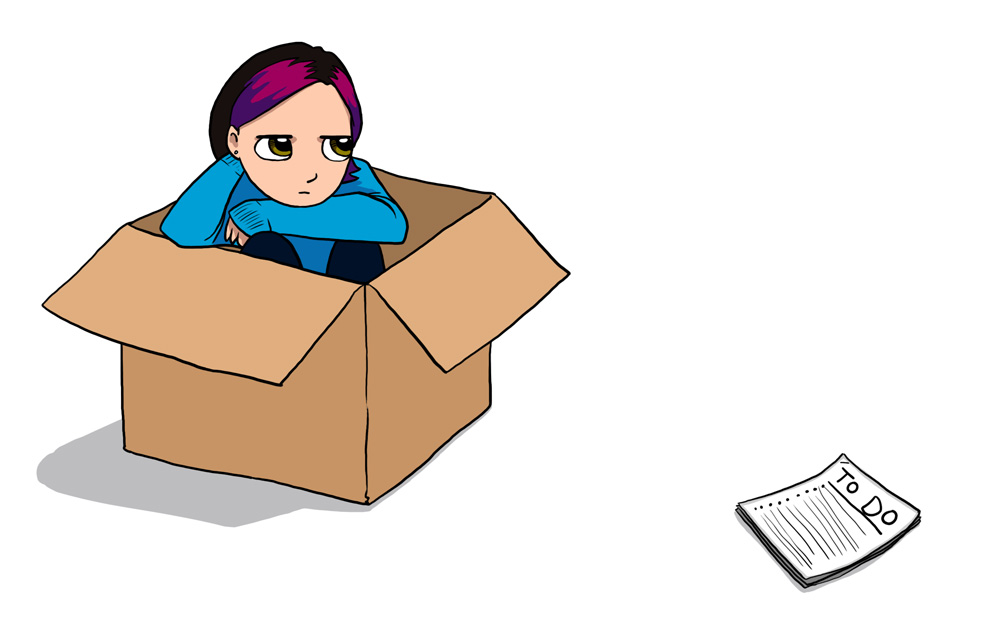 Just a short update to prove I’m still around. The move preparations march inexorably forward. Packers show up tomorrow. The appliances and big stuff have already been put in storage. Our most valued possessions have been entrusted to our friends for safekeeping. It’s starting to feel like this is actually real.

I’m once again reminded how much I hate the details of moving. Not the part where I end up in a new place, I think that’s fun and exciting. I even enjoy getting to unpack and arrange all my stuff. No, I hate all the parts that come in between, especially packing. Being a packrat, I have to sort through all my accumulated “treasures”. In the beginning it’s cathartic. I start tackling all the rat piles and purge the junk. Over time though, the continual barrage saps my willpower. Why do I have a large collection of pens with no ink? Twenty empty ribbon spools? Balls of thread clippings? Or enough plastic bags to build an effigy of myself? Blaaaargh!

Now I’m just exhausted–even though I don’t have to pack all the things myself. I still have all the post-packing cleaning ahead of me too. And just in case I thought I might not be ready to leave this place, the upstairs apartment once again gifted us with a bathtub of water via the ceiling above our bed–a bathtub of water mixed with bleach…yup, I’m ready to go.

I’m just going to say it now: things are probably going to get more erratic from here on out. And there will probably be some ranting and raving. Hopefully I will make it out the other side with some semblance of sanity.

Now that I have a definite date, I can feel the stress of the move building. Everyday the vague sense of doom gets just a little stronger. It lurks at the back of my mind and in unguarded moments I have flickers of panic. At some point I am sure it will devolve into full blown panic.

I’ve done big stressful moves before. I moved across the country to live in sin with the Boy-who-became-Mister, and I had no idea if it would work out or not. This is much worse. Moving across a huge ocean to an entirely different continent? Where I don’t even speak the language? With two cats? And I agreed to this because I wanted to do this? I might have been misguided.

Okay, I’m back! I spent last week down visiting the storied Grandma, down in North Carolina. I thought I’d be able to wrangle out a post while I was there, but as is often the case, my ambition and reality didn’t align. C’est la vie.

While I didn’t get any writing done, I did do a lot of plotting…nefarious plotting.The Mister and I have decided to turn to a part-time life of villainy (this may or may not coincide with a pubcrawl next week). As most of our dastardly plans revolve around making a public spectacle of ourselves (such is the wont of supervillains) we find ourselves in need of some dramatic costumes. Otherwise people might mistake us for regular villains. Or drunken louts. One of the two. Maybe both. END_OF_DOCUMENT_TOKEN_TO_BE_REPLACED

How to Enjoy Spring

Ahh, the sun is out, the birds are singing, and the daffodils are starting to push their way up. Spring must finally be on the way right? Hahaha, just kidding, it’s just a tease. A cruel, cruel tease.

I’m going to be honest, I’m pretty close to full blown grumpus. If the weather doesn’t stop toying with me soon, I might lose it. I want sunshine. I want to go barefooted. I want to stop wearing pants. Right now it’s a pleasant 65F outside. I can hear gobs of birds warbling and crooning. It smells like spring. Unfortunately, I’ve already checked the weather, and it’s going to be back down to freezing with 25 mph winds tomorrow. Oh what fun! I think I’ll start working on my blanket nest now.

Running just a bit behind this week, aren’t I? I assure you there’s a good reason for it. Totally not because I’ve been spending too much time on my computer playing Banished, building virtual settlements. Certainly not. (Okay, maybe I’m a liar.)

Well, in the time I haven’t been engaged in mismanaging the ill-fated citizens of the village Snellstochito, I have been continuing to work on my Japanese. I got through katakana (the other syllabary) on my own and purchased Japanese for Everyone to continue my studies. So far the choice seems sound. In the first chapter, the words for beer, wine, and whiskey were introduced. END_OF_DOCUMENT_TOKEN_TO_BE_REPLACED

True story. Except in reality I spit all over my keyboard. It was kind of gross. This wasn’t my first near-bug-eating experience, but at least I didn’t find out what the bug tasted like this time. (If anybody needs to know what a stinkbug tastes like, I got ya covered. Hint: it’s a lot like they smell.)

Moral of the story? Oreo’s are terrible and you shouldn’t eat them. I knew this already, but now I have a traumatic experience to help me remember.

Also, if you half-ass re-sealing the package, there is a non-zero chance you will end up licking a bug. 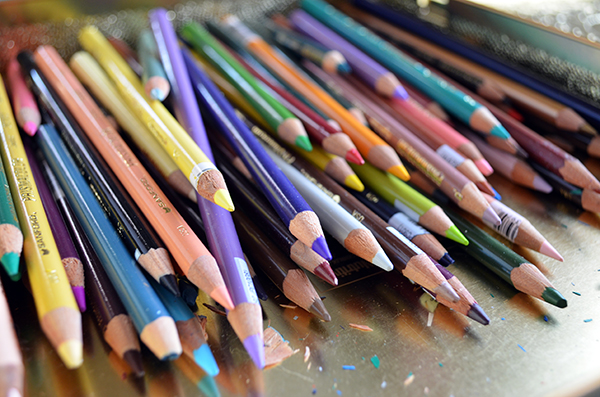 In light of approaching Valentine’s Day, here is a short story of love…and betrayal! Because that’s more exciting. END_OF_DOCUMENT_TOKEN_TO_BE_REPLACED

It seems like everybody is getting sick lately. Despite my efforts to avoid it, Mr. Boy managed to give me his head cold, icky crud. It’s that lame kind of in-between sick where you feel like crap, but not bad enough to stop you from feeling guilty about taking a day off. I feel like I should be working, but my brain feels all blurry and my face is full of mucus. I finally decided I probably shouldn’t work, because I don’t really want to make germ filled plushies. I just imagined my innocent little creatures going out into the world like so many tiny small pox blankets.

My guilt being assuaged, I decided to fill the gaps between napping sessions by continuing to fill my moleskine sketchbook. Since my attention span is a bit short right now, I’m filling a page with tiny little 2.25″ square drawings. I don’t know if I’ve mentioned it yet, but I am still quite in love with my new markers. It doesn’t take much encouragement for me to break them out and doodle. Even if I don’t feel like doing anything else.

Anyways, Mr. Boy said something about a “chibi Hellboy” and somehow I ended up with Hellboy chumming it up with an octopus. I’ll pretend it’s because I’m sick. Then I tried a self-portrait. I didn’t mean for it to look like I was disgusted at the mushy cephalopod friendship above. It turns out it’s somewhat difficult to draw yourself disapproving of your own hair cut. (I got pissed off at my bangs the other day and because I’m a cheapskate, I trimmed them myself. I have sort of “seventies, Farrah Fawcett” bangs as my friends kindly informed me. I suppose it could have turned out worse. I could have ended up with a Flock of Seagulls do.)

Now I have four more little squares to fill up. Instead of coming up with the rest of them on my own, I’m offering up some little mini commissions.  Judging by the duration of Mr. Boy’s illness, I’m going to be at this for a couple of more days at least.  So for the low, low price of only $5 you can tell me what to draw in my little book for the rest of the week. If you are interested you know where to find me.

I think it’s about time I go back to sleep on the cat. And I swear the next post won’t have anything to do with markers. For reals.